When the Cataclysm struck a lot of the lush nature in Faerun was devastated by drought and un-natural disasters caused by the destruction of Mystra's weave.

Everbloom was created by the God of Wild nature, Silvanus, in an attempt to cleanse Faerun through nature's fury.

After the Cataclysm, many young engineers and mechanics started to develop replacements for everyday magic that was expected of societies in the cities. These engineers would eventually become the founders of the Neo Faerun Order. When Kareska ascended to Goddess of Magic, and magic returned to its users, many people thought that Faerûn would return to its old habits. But it was too late, the cities had already had a taste of what technology could do, and sought to improve their constructions by mixing them with magic. This created great technological advancements, but also gave birth to the first rebels against the machines, a group that would eventually become Everbloom.

Everbloom believes in the balance between life and death, the natural world and the destruction and cleansing of anything unnatural and mechanical.

Everbloom has no rigid command structure, only a handful of interlinked Arch-druids that directly obey their gods and serve as their avatars. There is however one noted frontman:

And his personal strike team, the Furythorns:

Everbloom accepts any Race or creed into it's embrace as long as the intentions are pure and they act in accordance with the strict rules of nature.

Everbloom's exact opposite and natural enemy, the Factions harbor little tolerance for the others way of life and creed. Even people not directly affiliated with Neo Fearun yet have their origins in one of their capital cities are harshly judged and despised by any self-respecting Everbloom member. The Neo-Faerune border is largly contested by way of sea and air, through Neo Faerun's superior technology and magic they have devised many deadly contraptions that keep the Everbloom Druids at bay.

Being the furthest away from their own borders, Everbloom seldom have to contend with the Drow elves and thus have no particular interest in them, they do however fear the goddess Lolth and her savage and deadly spiders, natural beasts that are not controlled by the gods of Everbloom.

Both factions being purveyors of the world pre-eclipse, these factions have a friendly yet tenuous relationship that is quite lucrative for the Everbloom cities close to Epsilon borders and their unofficial capital That-Place-We-liked. Many Everbloom refugees find shelter in Epsilon cities during times of war, this has also led the the annexation of several smaller villages close to the Epsilon borders as most of the population became saturated with Everbloom refugees.

The embodiment of everything Everbloom fights against, Thayans who desert and join Everbloom are often greeted with dismemberment and torture and the reward for capturing or killing a high ranking Thayan would fill the pockets of any bounty hunter. This intense hatred for Thay has sparked avid interest from independent mercenaries who make an easy living slaying Undead and Thay alike. 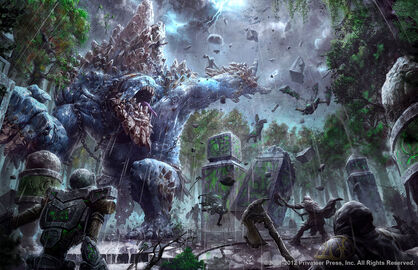 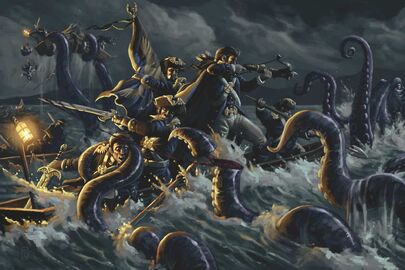 Everbloom vs. Neo Faerun
Add a photo to this gallery
Retrieved from "https://nitharos.fandom.com/wiki/Everbloom?oldid=6019"
Community content is available under CC-BY-SA unless otherwise noted.