The infamous drow elves spent most of known history within the underdark, a vast network of caves and chasms beneath the earth. The drow have always despised the surface races and regard them as vastly inferior. When the cataclysm struck and the eclipse engulfed Toril in eternal darkness the Drow elves were lead by the then mortal Lolth to the surface world to claim their rightful place in Faerun.

When Mystra died in 1349 DR, Lolth informed her devoted that it was time for the Drow to strike back and take the surface. To complete this plan, many drow would have to settle their disputes and work together. The drow armies formed under the leadership of Matron Mother Kalgra and Matron Mother Baenre, and sought alliances with demons and devils alike. It didnt take long before they gained a foothold on the surface.

The Dominion's goals are simple; conquer all and enslave the inferior races. The routes to their goals may vary, be it through deception, politics or force the dominion will prevail.

The drow live in a matriarchal society fueled by greed and pride, yet the race suffers from infighting and deception within their ranks diminishing their destructive potential.

Lolth's Dominion, like Thay don't hold politics and dimplomacy in high regard, they see all other races as infirior and untrustworthy compared to them.

Being far from any considerable borders Lolth's Dominion aren't bothered with Everbloom. The Factions have a natural distaste for one another, but out of the entire faction roaster Everbloom might be the one that get along most with the Dominion.

Another faction far from their borders Neo Faerun don't get much attention from the drow.

Epsilon holds close border with the Dominion, many of the fortresses and citadels held by Epsilon are highly saught after by the drow as they have massive strategic value for the Dominions war against Thay.

Due to their close proximity and their agressive expantion Thay and the Dominon are heated oponents. The Drow have excellent fighting capabilities against the undead, yet their sheer force of numbers keep the Drow at bay. 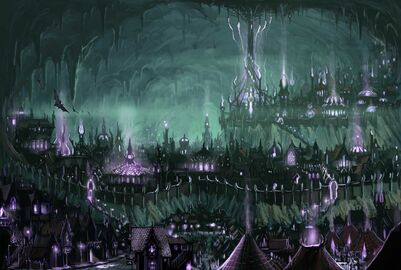 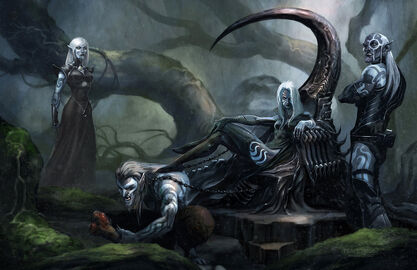 Drow group
Add a photo to this gallery
Retrieved from "https://nitharos.fandom.com/wiki/Lolth%27s_Dominion?oldid=6018"
Community content is available under CC-BY-SA unless otherwise noted.